There is significant research on the role of attention and mono- versus multitasking in productivity and efficiency. Similarly, there is strong evidence (such as the research of Tversky and Kahneman) linking cognitive recruitment with feelings of stress and effort. The implications that emerge from treating attention as a currency are less well supported by formal research but are fairly straightforward and have proven useful to large numbers of alumni.

Roughly speaking, attention measures what portion of your conscious mind is available to focus on a chosen task or experience. If your brain were a computer, attention would be your available RAM; if your mind were a desk, it would be how much clear space there was on the surface. 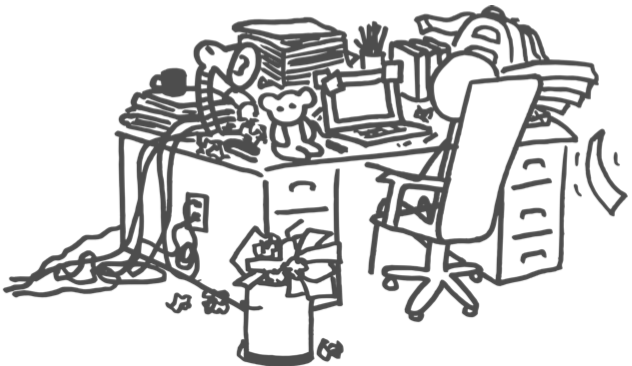 Like money or time, attention is a currency that we can exchange in order to get certain resources. For instance, we might pay attention to:

A lecture, so that we can learn something new about (e.g.) math or psychology or literary theory

A news segment, so that we can stay informed about what’s going on in the world around us

A significant other, so that we can enjoy their personality and show that we care

A dexterity task, like cooking or woodworking or juggling, so that we can avoid mistakes and achieve the desired result

A physical or emotional sensation, so that we can better understand the links between reality and our reactions to them

However, unlike time and money and most other currencies, attention is sort of an inverse resource. Time and money have diminishing marginal returns—the more you have, the less difference a little bit more makes. Attention works the other way around—the more you can free up, the more relevant and powerful each additional bit becomes.

Think of it this way—if you were trapped in a room with ten people screaming and banging on pots, how much would you pay to convince one of them to stop? At first glance, probably not much—going from ten sources of loud and painful distraction down to nine doesn’t really improve your quality of life, and given that there’s going to be a cacophony either way, you’re probably going to feel like those resources are better spent elsewhere. It’s unlikely to seem like the correct marginal investment.

The story becomes different, though, when we start talking about dropping from nine to eight and eight to seven and seven to six. Suddenly, we can see that going from three screaming noisemakers down to two might actually make a significant difference, and going from two down to one comes close to halving the unpleasantness of the experience. If we were willing to pay a dollar for the marginal benefit that came from shutting up the first noisemaker, it’s not inconsistent to pay ten dollars to shut up the fifth, since that makes a relatively larger difference. Following this reasoning, we might pay twenty to silence the eighth, fifty to shut up the ninth, and a hundred or more to get rid of the very last one.

To be more concrete, imagine that you have three things on your mind, taking up the majority of your attention: there’s a major project due at the end of the week, you’ve been having a lot of arguments with a friend and you can’t quite figure out why, and your dishwasher is broken. In situations like these, it’s not uncommon for people to end up mulling over all three problems at once, leading to a general feeling of being overwhelmed. There’s a kind of stressful synergy, whereby the difficulty of handling three things at once is much greater than the sum of the difficulty of each on its own.

But if you knew that the project was waiting on contributions from a coworker, and that you’d done everything you could in the meantime, and if you also managed to find a repair service for the dishwasher and they were coming later in the day, then both of those concerns would fall away, and you would be able to bring your full attention to the problem of your tension with your friend. This isn’t just three times faster than solving three problems in parallel; it’s more like ten times faster, or twenty times more effective.

This realization has two important consequences:

We’ll benefit more from a general policy of prioritizing attention-freeing interventions than from individual decisions to do so. Initial gains in attention don’t matter very much, but the process snowballs, and a habit of reducing distractions wherever possible pays off enormously in the long run. It rarely seems like the right priority in any given moment, but the narrow view leads to a less effective overall strategy.

design policies for yourself

[[The first bit of attention we lose is the most valuable]]

In practice, this means that if you can trade some resource for more attention, that trade is usually correct. That’s not absolutely true (there are cases when the attention gained is too small, or the cost too great), but it’s more true than we naively tend to think.

Many of us have a very specific sense of what it means to “pay attention,” and often overlook other modes, sensations, and experiences that are drawing on our available attention resources. Among these are:

mental effort. You find yourself trying to remember to do something, or you have to do some mental math, or you’re pushing to reach a conclusion based on complicated input (this doesn’t apply to arenas that have become second-nature even if they used to require effort or require effort for others).

Concentrating. When someone is talking nearby, or your phone buzzes, or you’re surrounded by a cluttered, distracting environment or using a poorly-designed system, you spend additional attention to remain focused on what you were doing.

decision-making . Should you get dressed before or after breakfast? What should you wear? Do you have plans for tonight? Do you want to come over? Each decision you make costs attention, and mulling over a decision (or rehashing it after it’s been made) costs even more.

multitasking. If you’re trying to read email on your phone while listening to a meeting, you’re almost certainly paying massive attentional costs, and neither task is being completed very well relative to your potential ability.

Other key properties of attention

It’s the main currency of change. You can think of attention roughly as the capacity for System 2 to increase activity. Hence, pretty much any time you want to intentionally change something about yourself, attention is the fuel you need to burn.

It’s the difference between clear and muddled thinking. Using up attention tends to activate your SNS (`a la Againstness) making it correspondingly harder to update correctly. Regaining it allows you the space you need to weigh evidence fairly and carefully, and to calmly make sense of your options.

It lets you enjoy sensory experiences. Even if you literally stop and smell a rose, you won’t enjoy the experience if you’re distracted by thoughts of work or an argument waiting for you at home. Your ability to let in the beauty and delight of your surroundings and simply enjoy life depends critically on you having attention to spare and to spend.

It’s the foundation of personal connection to others. When you’re with someone you care about and your mind is in the present moment, you can be curious, and vulnerable, and really share an understanding of the experience and each other. But if your mind is elsewhere because distractions keep cropping up, you won’t really feel there as much—and chances are, they’ll feel the same way.

There are three general strategies that we encourage you to adopt, to increase the amount of available attention you can rely on as a cognitive resource:

Solve whatever keeps coming to mind. If you’ve been procrastinating on doing your taxes and they keep causing anxiety or stress, just sitting down and getting them done can free attention—as can hiring a tax preparer to do them for you.

Change your relationship to the situation so that you’re no longer distracted.

If you pause for a moment and intentionally acknowledge to yourself that you’re not going to meet that work deadline at the end of the week, and that ruminating on it isn’t helping, it might become easier to decide what to do about the consequences and then return your focus to whatever you’re trying to do now.

Try things like meditation and gratitude journals to maintain stable positive attitudes. Use to-do lists or other note-taking systems so that you can let things fall from your immediate attention without fear that you’ll fail to remember them. If you come across a spare hour, use it to “clear space,” either by physically tidying, mentally reorienting, or getting your emotional house in order.

Many of the units in our workshop implicitly help with attention using at least one of these three strategies. For instance, againstness and aversion factoring focus on the second, while TAPs and resolve cycles draw upon the first. Systemization, which is the unit most directly targeted at increasing efficiency and reducing distraction, attempts to weave together all three.

Psychologist Daniel Kahneman won the 2002 Nobel Prize in Economics for co-developing prospect theory, which is a model that merges economic theory with empirical results in experimental psychology. Prospect theory provides a framing for understanding why resources that are measured in terms of the absence of a negative (such as attention and lack of debt) will often have increasing marginal utility curves.

Kahneman, D., & Tversky, A. (1979). Prospect theory: An analysis of decision under risk. Econometrica: Journal of the Econometric Society, 263-291. https://en.wikipedia.org/wiki/Prospect theory

Research on attention and task switching has found that there is a large benefit to focusing on one task at a time. Task switching causes a large temporary drop in performance immediately after a task switch and a smaller persistent impairment as long as switching tasks is a possibility. Being engaged in a task activates a variety of cognitive processes (involving attention, memory, etc.) that are relevant for performing that particular task, which are collectively known as a task-set. One proposed explanation for the impairments caused by task switching is that they are due to the cost of switching task-sets and of having multiple competing task-sets activated at once.

A brief summary of the psychological research on multitasking: http://www.apa.org/research/action/multitask.aspx

David Allen’s book Getting Things Done claims that one benefit of having an organized system for planning your actions is that it frees up attention, since there is no need for a project to be on your mind if you can trust that it is in your system. A recent set of studies by psychologists Masicampo & Baumeister (2011) provides empirical support for this claim. They found that unfinished goals led to intrusive thoughts and worse performance on other tasks, but the intrusive thoughts disappeared among those who were given a chance to make specific plans for how to pursue their goal.